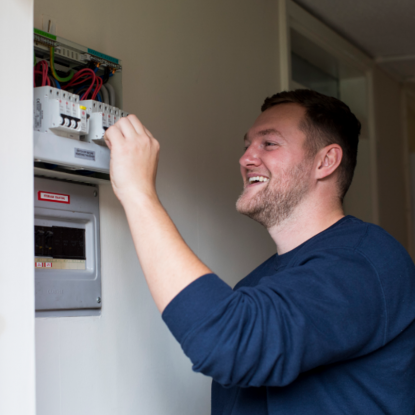 Stafford and Rural Homes (SARH) has welcomed the latest cohort to its successful apprenticeship programme.

Over the past few years the housing association has taken on almost 40 apprentices and almost all have found jobs with SARH or other local organisations or businesses after passing their NVQs.

Now a member of Housing Plus Group, SARH is set to continue providing career opportunities to people living in the communities it serves and the latest recruits to the organisation include:

The 18-year-old from Highfields in Stafford was part of the Leicester Tigers Academy programme thanks to his impressive record at Stafford Rugby Club and was studying sports science at a local college.

Now, after spotting the apprenticeship opportunity on a government website, he’s embarking on a two-year programme that will equip him with skills to build a rewarding career.

“I always look forward to a challenge and now I really have something to set my mind to,” explained the joinery apprentice. “I’ve finished my first year and now have my heart set on what promises to be a really rewarding career with a trade that will always be in demand.

“Everyone has been very supportive and friendly, particularly my mentor who understands what it’s like to be in my position as he was once an apprentice himself.”

As well as picking up practical, ‘on the job’ training Anthony is also attending college as he works towards formal NVQ qualifications.

Following in the footsteps of his sister Adela, 18-year-old Charlie had a good idea of what to expect when he joined SARH as Gas Apprentice in July.

“Adela has always said how friendly everyone is and, how good the apprenticeship programme is,” explained the former Blessed William Howard Catholic High School pupil from Doxey.

While his older sister completed her apprenticeship in customer services and now works in an office-based role, Charlie is keen to purse a trade career and build on the plumbing qualifications he obtained whilst studying at Robaston College.

Now he is working towards further NVQ qualifications alongside a range of practical skills that will help him as he advances his career.

“To become a gas engineer seemed a natural progression and when I saw the apprenticeship advertised online it seemed too good an opportunity to miss,” Charlie said. “I also enjoy getting out and about meeting people in their homes and going home at the end of the day thinking I have helped them.

Apprentice bricklayer Will is upholding a family tradition as he builds the foundations of a career in the construction industry.

The 16-year-old from Baswich joined SARH in July and says intends to follow in his father’s footsteps as a builder as he embarks on a two-year apprenticeship with the area’s leading provider of affordable homes.

“Working in the property maintenance team has really given me an insight into the industry and I’m really enjoying it,” explained the former Walton High School student.

“I’m also getting a lot out of the college work that forms part of the apprenticeship programme and I’m working towards formal NVQ qualifications that will provide a further boost to my career. Most importantly, everyone I’ve met has been very supportive and I’ve received plenty of encouragement as a learn my trade.”

Away from work, Will is a keen footballer and a striker for Stafford Town. Now he’s proved a winner with his new colleagues.

The oldest of its most recent cohort of apprentices, 26-year-old Shane joined SARH in July and has seen his career plans get back on track since joining the housing association.

On leaving school the dad-of-two from Brereton, near Rugeley, spent two years studying to be an electrician but has since drifted through a range of warehousing jobs.

“I just didn’t have a clear career path but wasn’t too concerned,” he explained. “When you become a parent though your priorities change, and I realised that I needed to start planning for the future.

“When I spotted the opportunity to join SARH as an apprentice electrician I thought it would offer the chance to start building a proper career and applying for the post has proved to be one of the best things I’ve ever done.”

Shane says that people are surprised when he tells them he is an apprentice as they expect the programme to only be open to school or college leavers.

“Everyone has been really supportive though, and the apprenticeship programme has been fantastic. In fact, I’ve learned more in a few months than I did in two years at college where I was studying full-time.

“I hope I can be an example to others and show that when an opportunity comes along you need to grasp it with both hands!” he added.