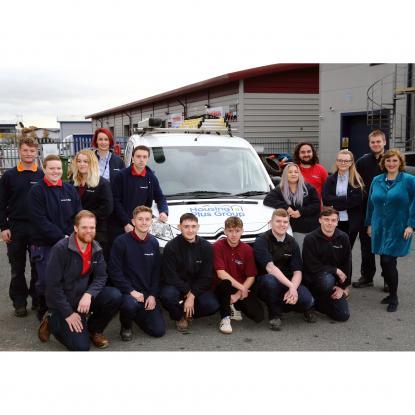 It was more of a case of you’re hired rather than fired when a major employer covering Shropshire and Staffordshire celebrated bringing more apprentices into the business.

Fourteen apprentices and trainees from Housing Plus Group met chief executive Sarah Boden for a catch up about their progress before gathering for a photo shoot.

Housing Plus Group, which includes the housing associations Severnside Housing in Shrewsbury and South Staffordshire Housing Association (SSHA), has actively been recruiting young people for its repairs and maintenance team, Property Plus.

The young people, whose length of service ranges from a few months to over three years, work in a range of different roles across the two counties, including plumbing, electrical, gas engineering, multi-trade, and administration.

After recognising that its repairs and maintenance team has an aging workforce, the Group launched its Construct Your Career campaign earlier this year to attract more 18-24 year olds.

Advertising on social media and in newspapers saw around 70 people registering their interest, resulting in five apprenticeships and one traineeship.

Eighteen-year-old Nathan Gregson was one of the successful candidates and is a multi-trade apprentice based in Shrewsbury.

“I saw the opportunity on Facebook and I just went for it,” he said. “I get to do a little bit of everything from plastering to fitting bathrooms. It’s giving me a great mix of knowledge and I look forward to the future, working for the Group.”

Haydn Beddow, 26, who is based in Staffordshire and is in his fourth year of an electrical apprenticeship, said: “I think it’s the best apprenticeship opportunity you can get and it’s the best job I’ve ever had. I’m looking forward to hopefully further career progression here in the future.”

“I feel immensely proud whenever I get the chance to meet our new apprentices and trainees,” she said. “They are our future and we aim to employ talented, dedicated young people and support them to be the best they can be.”

For more information about latest vacancies at the Group visit www.housingplusgroup.co.uk/about-us/careers