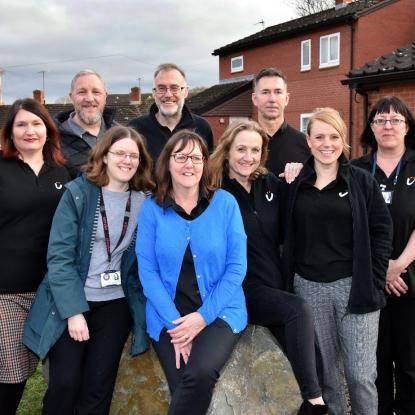 We are delighted that one of our teams providing life-changing support for vulnerable people in Shropshire has been shortlisted for a top award. Our Shrewsbury-based floating support team has made it through to the finals of the Support & Care Team of the Year title, in the national Housing Heroes Awards.

The floating support team assists our tenants and other residents who are at risk of homelessness. Last year it helped almost 700 local people who were homeless or worried about losing their home. The team works with other local organisations as part of the Sustain Consortium providing similar services across the county.

There is more to being homeless than having nowhere to live. Anxiety caused by homelessness even made it difficult for Catherine to speak: “I was homeless for nearly a year, sleeping on the streets. The floating support team gave me the confidence to turn my life around and helped me find my voice. I’m renting a home now and it feels as though I’m finally taking my place in the world.”

Alcohol and drug dependency led Paula into debt and meant that she was facing the possibility of losing her home: “My doctor put me in touch with the floating support team. I was really nervous about talking to my support worker about the mess I’d made of my life.

“I spent the first two meetings crying but then I realised this was an opportunity to do something positive, to get some control over my life before it was too late. I’m secure in my home now and that stability is really important. From there, I can work on everything else.”

There are countless situations where the floating support team can get involved.  Along with partners in the Sustain Consortium, its members work in situations where other services often don’t reach.

Donald and Sylvia have learning difficulties. A hoarding crisis put their tenancy at risk:  “We had a charity shop habit that got out of hand. We used to go most days and buy soft toys, dolls, clothes, all sorts of things. Our support worker was brilliant. She helped us go through everything, one room at a time. It was three or four weeks before we finished.

“It feels good to have got rid of it all; it’s like a fresh start. When we go out now, it’s nice to come home.”

Care and support director Les Clarke congratulated our finalists, saying: “The members of this team do great work, often in difficult circumstances. They’ve kept that support going during the pandemic, checking-in with vulnerable customers and providing help and advice by telephone. We’re here to make a positive difference and I’m very proud that a team making such a huge difference to people and communities, has received such well-deserved recognition.”

The Housing Heroes awards celebrate the unsung heroes of the social housing sector. This year’s winners will be announced in a virtual awards ceremony on 10 September.