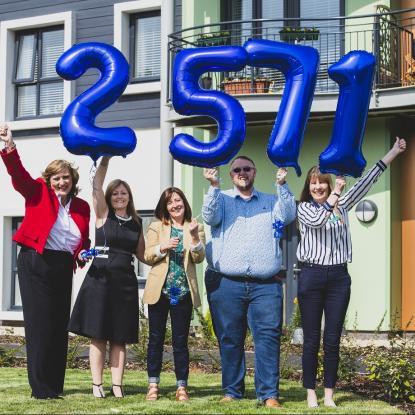 Housing association employees have marked the end of a successful fundraising campaign by handing over donations to good causes chosen by staff.

Each year Housing Plus Group backs charities nominated by employees. During 2017 the group raised money for Macmillan, the MS Society and Sands (stillbirth and neonatal death charity).

The pounds came rolling in thanks to raffles, sponsored walks and cake sales.

“Colleagues succeeded in topping last year’s total and raised more than £2,570” said Housing Plus Group’s chief executive Sarah Boden. “I’m really proud of everyone who worked so hard to support such great causes. Many of us have friends or family members who have been helped by these charities and this is our way of giving something back.”

Cheques were presented to Pauline Lewis of Macmillan, Lyndsey Smith of the MS Society and Elliot Ashton of Sands. Sarah Boden and neighbourhoods director Jan Goode met with the charities at River View, the group’s recently completed retirement living community in Penkridge.

“We are absolutely delighted to have been chosen as one of the charities of the year for Housing Plus Group,” said Lyndsey Smith. “Their support will make a real difference to the work that we do in this area.”