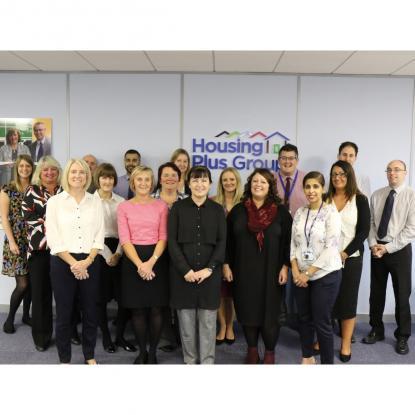 The hard-working finance team in Housing Plus Group has been shortlisted for the coveted title of Housing Finance Team of the Year.

Judges in the Housing Finance Awards 2019 looked for evidence of team effort, as well as a strong emphasis on people and a shared vision. They expected evidence of continual improvement in financial performance and an indication that services delivered by an organisation benefit from close interaction with the finance team.

Housing Plus Group is a Community Benefit Society providing homes, care and support services across Shropshire and Staffordshire. As one of the largest housing providers in the area, the group manages 12,000 homes and employs more than 700 people.

The finance team was one of the first to be established following the creation of a new group joining together neighbouring housing associations in Staffordshire and Shropshire. The team provided a model of ‘one business’ culture and a strong core of financial stability during a period of significant change.

“The team overcame huge challenge to complete year-end accounts and undergo a full financial audit within weeks of the introduction of a new structure, reporting tools and financial systems. Colleagues who pulled together in those difficult weeks and months have remained a strong and closely-knit unit, something that is supported by regular away days, social events and team-building activities,” said deputy chief executive and group finance director Philip Ingle.

“Throughout an incredibly demanding period the team proved that housing finance is certainly never boring. I’m delighted that everything they have accomplished is being reflected in national recognition at the highest level.”

The winners of the Housing Finance Awards will be announced on 20 March.